The US Department of Justice Weighs In On Sheriff Joe Arpaio 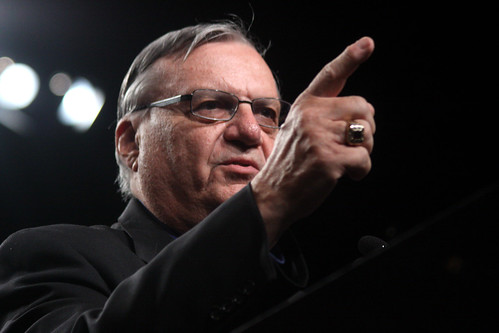 It’s fortuitous that the Republicans scheduled a debate for tonight. In light of the findings released today by the U.S. Department of Justice, they’ll all have an opportunity to weigh in on whether Arizona’s Maricopa County Sheriff Joe Arpaio is a tough law-and-order sheriff whose famous crusade against undocumented immigrants is a noble public service or whether he is, as the Justice Department has just found, likely nothing more than a racist thug who has engaged in an illegal “pattern and practice of unconstitutional conduct and/or violations of federal law” in a rabid effort to terrorize the county’s Latino citizens. It’ll be especially interesting to hear what Rick Perry has to say. Just a few weeks ago he went to Maricopa County to pay homage to Sheriff Joe in a desperate attempt to shore up his bona fides with the fringe right.

The investigative findings of the Department of Justice are shocking. The Department conducted a comprehensive investigation into Sheriff Joe’s Maricopa County department and found a litany of serious abuses, including:

The Department’s investigation uncovered additional areas of serious concern, including:

To Homeland Security Secretary Janet Napolitano’s credit, she immediately severed the Department’s 287(g) agreement with Maricopa County and is directing the Sheriff’s office to reassess its Secure Communities program. This action may come a little late for the scores of immigrants whose rights were abused by Sheriff Joe. But better late than never.

In light of the Justice Department’s report, Sheriff Joe Arpaio ought to immediately resign or be placed on administrative leave without pay pending resolution of the charges. The Department of Homeland Security should also review its 287(g) agreements with local law enforcement agencies across the country to be sure no other rogue law enforcement officials are using them to engage in the wholesale destruction of civil liberties.

Just this week the Supreme Court agreed to review the constitutionality of Arizona’s SB1070, a state law which criminalizes Arizona’s undocumented immigrants and subjects them to racial profiling. At bottom, SB1070 is nothing more than an ethnically charged hate law concocted by anti-immigrant restrictionsts to create a climate of fear.

Let’s hope the Supreme Court sees SB1070 for what it is. After all, can you imagine SB1070  in the hands of Sheriff Joe Arpaio?