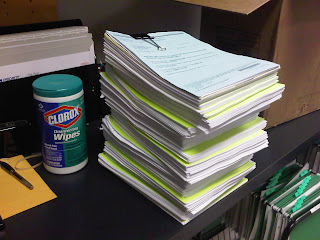 Last week in a speech you broached the subject of the possible need to increase filing fees because of a decrease in the number of applications received by USCIS this fiscal year. You also noted that there was over $100 million shortfall in your budget because of these decreased filings. I have some suggestions to meet your budget.

First, look at your budget projections from this last year. Last October, who didn’t see the recession? Why weren’t reductions in force made at that time? On April 1 when only 33% of the H-1B applications were filed as compared to the year before, why didn’t USCIS staff get pared down? A monumental increase in naturalization applications occurred before the Presidential elections (as they do every 4 years), who did not not see a decrease in naturalization applications for 2009! My heck, every business in America was laying off employees, but not USCIS!

Second, have a heart to heart talk with anyone who issues an RFE that requires more than 5 pages to respond to. This last week we submitted a 3,000 page (30 lb.) response to an RFE (see the picture above), which alleged that an Accountant was not a professional position! Director, what is the deal with your Service Centers? Is there simply too little to do and too many employees? The “service” we are receiving as your customers is not doing the American Economy any good.

Third, why are the local adjudications officers interviewing non-current priority date visa applicants, including on Saturdays in September! You are paying OVERTIME to examiners to interview people who cannot be approved for their green cards. What sense does that make?
I have many other ideas as well if you would like to chat. The bottom line is this. The agency you have just taken over is in serious need of a top to bottom review. You have a monstrous challenge ahead of you to bring this agency in line with the priorities it should have. Priorities that not only include national security, but also ensuring our own economic well being and competitiveness by promoting job growth and allowing companies to hire qualified workers, keeping families together through reunification, and bringing new citizens into the fold.
You need to get control of service centers, where officers are issuing, at increasingly frequent rates, Requests for Evidence that are not only unnecessary, but which are onerous and burdensome, and appear to be designed to make the employer give up his request for the visa application. You have local offices finding marriage “fraud” where no such fraud exists. You have CIS doing 25,000 random walk ins of legitimate U.S. employers of H-1B workers, disrupting the workplace asking questions about the H-1B employer, without regard to a lawyers appearance in the case in clear violation of the 6th Amendment. The list could go on about what your agency is doing wrong. And, while there are things USCIS does right, the reality is that rather than serving immigrants and their employers, you are punishing them.
So, before you raise your fees, I think you MUST first get your own house in order. You should not and cannot honestly balance your budgetary disaster on the backs of the employers and immigrants you are committed to serving.
With all sincerity, I wish you the best of luck in your new position.