LIAR! What Does Health Care Have To Do With Immigration 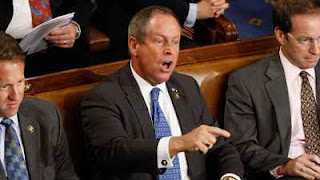 During President Obama’s address to a joint session of Congress on Tuesday, Congressman Joe Wilson (R. SC), shouted “LIAR!” when President Obama stated that the proposed health care plan would not cover “illegal aliens.” Now, Joe Wilson said he should know this because he once was an immigration lawyer. Whether that meant immigration from or to South Carolina, I am not sure, but one thing is for sure, no one I know ever knew Joe Wilson the immigration lawyer. If by “immigration lawyer” Mr. Wilson meant that he once helped an immigrant get deported, I am not sure that really counts. But if “Joe the Immigration Lawyer” is like “Joe the Plumber,” then maybe he thinks he really was one.

After all, an immigration lawyer would likely be able to understand what exactly the law means when it says that only citizens and permanent residents are covered under the Obama plan. What has caused Joe Wilson to react like this, besides a serious lack of self control, is the provision in the proposed legislation that eliminates the requirement of using the “SAVE” system to verify whether someone who is an immigrant, is legally in the United States. Use of this program has stopped very few undocumented immigrants from getting public benefits, but has stopped literally thousands of U.S. citizens, mostly poor, from obtaining benefits because of their lack of accessible proof of their citizenship.

Factcheck.org has presented a short article on Seven Falsehoods About Health Care. One of those applies directly to this point:

False: Illegal Immigrants Will Be Covered. One Republican congressman issued
a press release claiming that “5,600,000 Illegal Aliens May Be Covered Under Obamacare,” and we’ve been peppered with queries about similar claims. They’re not true. In fact, the House bill (the only bill to be formally introduced in its entirety) specifically says that no federal money would be spent on giving illegal immigrants health coverage:

H.R. 3200: Sec 246 — NO FEDERAL PAYMENT FOR UNDOCUMENTED ALIENS. Nothing in this subtitle shall allow Federal payments for affordability credits on behalf of individuals who are not lawfully present in the United States.

Also, under current law, those in the country illegally don’t qualify for federal health programs. Of interest: About half of illegal immigrants have health insurance now, according to the nonpartisan Pew Hispanic Center, which says those who lack insurance do so principally because their employers don’t offer it.“Misleading GOP Health Care Claims” July 23 – by Brooks Jackson, Viveca Novak, Lori Robertson and Jess Henig.

I can certainly see both sides of the debate, and, frankly, neither side is being completely honest or clear. What is quite clear, is how immigration, and our broken immigration system, keeps coming up in the context of the debate of national agenda items, such as the health care debate.
Several weeks ago I blogged on the danger that the tone of the Health care debate had for the coming immigration reform debate. Calling the President a Liar during his speech to a joint session to Congress is Exhibit A in what we have in store for the coming debate. If Joe Wilson the Immigration Lawyer can misrepresent the consequences of legislative language as straight forward as these two particular sections, we have to be prepared for the extraordinary misrepresentations of any positive aspects of an immigration reform bill. Whether it is “amnesty,” “rewarding law breakers,” “open borders,” “Liars,” or even “destroyers of American culture” we have to understand how to phrase and present the response. Without a doubt, the response from those of us who understand the need to balance immigration reform, with security concerns, and with economic growth has to be not only vocal, but focused. We, as Real Immigration Lawyers, must know the language of the proposed legislation, we must know the myths that are out there, and we need to be vocal in our response.
Next week, more than 40 talk radio hosts are descending on Capital Hill for the FAIR Annual Scare the Crap Out of Congress Boondoggle. The outrageous claims of the downfall of America caused by illegal immigration, along with similarly nutty myths will be presented as facts. Actual real news organization will cite the Center for Immigration Studies as a legitimate source of information. We must be prepared to call into our local radio stations, whose hosts are in D.C. next week, and be prepared to present the facts of immigration. Not by sugar coating the problems that are caused by illegal immigration, but rather by pointing out which specific laws are broken (INA 212(a)(9) anyone?) and how having a comprehensive solution can actually fix the immigration pothole in the legislative superhighway. Immigration Lawyers it is time to Stand Up and be vocal and beat back the immigration myths.