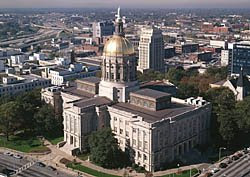 Today’s report from the National Council for State Legislatures on the 2009 legislation related to immigration provides a stark view into the minds of local politicos on the issue of immigration:

While national attention on immigration has declined, state legislatures are deliberating record levels of immigrant-related legislation. In the first half of 2009, state legislation related to immigration topped last year’s totals. So far this year, more than 1400 bills have been considered in all 50 states. At least 144 laws and 115 resolutions have been enacted in 44 states, with bills sent to governors in two additional states. A total of 285 bills and resolutions has passed legislatures; 23 of these bills are pending Governor’s approval and three bills were vetoed. No bills have been enacted in Alaska, Massachusetts, Michigan or Ohio.

One of the key elements of this report is the focus on how FEW of the states have issued resolutions in support of some type of immigration reform at the federal level–only 12 so far this year. So here you have the local politicos, with zero knowledge or understanding of the legal immigration system we currently operate under, proposing and passing legislation that affects us, our clients, and our businesses, yet these same politicos apparently are showing no interest in having this issue removed from their plates. This dichotomy speaks volumes about how local politicos WANT to use the immigration issue as an election platform issue. If state legislators were truly interested in resolving the immigration standoff in Congress, they would all march up to Capitol Hill in D.C. and demand that Congress act now on a comprehensive solution to this problem. Keep in mind that the consequences of a failure of reform are borne disproportionately by the states. So the states that bear the burden of immigration reform failure are lead by politicos who WANT to keep the failing system, in order to use the failure of Congress to act on immigration as a platform issue for local political gain.

This is a tragic, but not surprising development by state legislatures who would be better off spending their time in attracting business and people to their state, rather than chasing them away.